We managed to escape Trinidad ….eventually!  The budget was somewhat depleted but we now had an autopilot - a tolerant and hardworking crew.  Our lives became a lot easier - although the self-steering, Burt was a bit miffed at being packed away!  More repairs underway took centre stage – always at the wrong time.

Galley Bench.  The galley centreline bench was not attached at all to the stringer at its base on the floor, as it should have been and as shown in the Owner’s Manual.  I had to carry out repairs after the bench started shifting while we were sailing along in a seaway between Dominica and Guadeloupe; it was no fun for either skipper or crew!  Sadly, an example of lack of supervision in the manufacturing process.

Hose Clips.  I have also replaced quite a lot of old hose clips on fuel lines as we travel on. Loose clips allow air to be sucked in which occasionally cuts out the engine – and that never happens at convenient places or times.  We even found clips in out of the way places like Black Point (Exumas) so I now have a box full of various sizes and regularly check hose clips whenever accessing the boat’s plumbing.  Even though they are stainless steel an extraordinary number of them corrode and you only have to try and tighten them with a screwdriver/wrench and it soon becomes apparent when they no longer hold i.e. they easily rotate without tightening.  I throw these old ones away.

Engine Fan Belt.  The fan belt broke just as we were coming into a tricky anchorage at Normans Cay, the Bahamas!  The engine’s horn sounded and its dial showed a rather high temperature, but when I throttled down, I was able to lower the water temperature (I knew because the horn stopped blaring) and made for the anchorage at almost idle speed.  Not good when dodging coral bommies in an unfamiliar harbour.  After anchoring, I replaced the fan belt with a spare (fortunately) carried on board.  A very forgiving engine!!

Stove.  In Trinidad the stove was not working properly and I decided on a professional overhaul.  We engaged a local repairman.  I had to remove the stove from boat myself, so I should have recognised a downhill slide in the making!  When the stove was returned it was worse than when it had been taken away.  Eventually I serviced it myself so that knobs worked properly (removed all the grease the repairman had put into knob mechanisms), fixed into place the sensors that needed to be located up against the burners, and did a bit of cleaning.  This chap was recommended in a cruising guide, and in hindsight, we’ve concluded that what works for one may not work for others.  Anyway, it all worked swimmingly afterwards.  I still need to repair the auto lighting mechanism – the GS has to manually light burners. (She says that’s not too onerous however!)

Davits. We added custom davits in Trinidad to make dinghy handling a lot easier.  When sailing offshore in the Caribbean we’d put our outboard motor on a bracket on the stern (utilizing boom topping lift and block and tackle to raise dinghy) then raise the 11’ RIB on the davits via block and tackle to lines attached to front and back of RIB.  Initially this needed two people to raise outboard and one to raise dinghy but I can do it all singlehandedly now.  I tie the dinghy down to stop the RIB bouncing around when under sail/motor ie breast lines and springs.  When at anchor and using our dinghy, we can raise both dinghy with outboard still attached for security reasons if we have to.  Otherwise we use stainless anchor chain with padlocks to lock it all to WJ3.  For more serious blue water journeys, we still put the dinghy on foredeck (upside down) using the spinnaker halyard.  There’s enough room to lay it down in front of mast.  The outboard lives on its bracket on the pushpit.  I can’t use the windvane self steering when the davits are in place so especially asked for the davits to be removable/or rotated out of the way when the dinghy is put on the foredeck.  We sourced the fabricator through Power Boats and he did an excellent job, even coming out to the boat after we had launched to re-weld a join that we were concerned about.
﻿﻿
Autopilot.  I had a Simrad installed in 2009. It works a treat; just marvellous until it stops, which a lightning strike will do (and has).  We used this constantly from Trinidad up to the Bahamas and across to the Atlantic ICW.  It gave us a second pair of hands and kept its course better than either of us could.  The guys at Electropics were very professional and had it installed and working so that we could make our departure date.

Steering.  I had a defective wheel lock repaired and replaced (it had been removed), again with the professional help of Trinidad Rigging.  This required the steering pedestal to be completely pulled apart.  One bearing was damaged so I replaced it and also added two circlips (that hold the bottom bearing in place – one on top of the bearing, one on the bottom) that were not actually there.  They should have been. So much for maintenance by bareboat charter companies!

Batteries.  We had to replace them again in 2009, this time with four golf-cart batteries rather than the two D9s.  A new battery selector switch was also fitted at the same time, the battery wiring tidied up to better conform with industry wiring standards and new battery fuses fitted on wall of battery housing.  Our mech-elec’s team (on site at Powers) were very thorough and professional.

RIB Repairs.  Bruce’s (our RIB) fibreglass hull leaked via several cracks in the hull gelcoat.  We had that professionally repaired allowing me to get on with other stuff as our departure date loomed.  At the same time, I removed all the headliner internal access plates and had them painted with Awlgrip to match our interior lining colour.  Now replaced, it looks 10 times better than the original plastic which must be a different plastic to the headliner.
Posted by Hunter460 at 12:32 AM No comments:

We set aside another 2 months of our cruising season to add a few little extras in Trinidad.  Power Boat Yard was a good choice in every respect and we enjoyed getting to know the locals, other cruisers and experiencing life in Trinidad, the capital of “ridim”, mon!  At this stage we had finished our surveyor's report of essential "things to do" and now wanted some repairs or additions to make life a little easier....

Cutter Rig.  I wanted a more easily handled sail arrangement and so we added an inner forestay and new staysail.  WJ3 is now a cutter.  I would heartily recommend our rigging people – Trinidad Rigging – and his local staff who were very easy to work with and totally professional.

The sailmaker’s new sail appeared to fit okay and looked fine to me.  However, despite my many requests, he never came to check the fitted sail to make sure it was a tailored fitting – very disappointing.

More Canvas Work.    More canvas work was planned and David, the canvas man at Power Boats (marina/boatyard where we stayed in Trinidad) made side and rear shade cloth curtains for the bimini.  These additions completed the bimini/dodger ensemble so that we can keep both sun and bugs out of the cockpit while allowing the main hatchway to be kept open when it rains.  We have our very own bug house now!  David made another smaller awning for the foredeck and this makes it even cooler when at anchor – great.  Even better, we don’t need to do the “hatches” song & dance routine when it rains, as it frequently does in the tropics.  The bimini also needed stitching in odd places and its PVC window needed to be replaced.  I couldn’t see through it to check the set of my sails.  We also had a cover for Bruce (our dinghy) made to protect him against nasty UV rays.  Now he has his very own “coat”.  David was very patient and professional; working hard to ensure we were completely happy and that his product was delivered on time.  He is highly recommended.
﻿﻿

﻿﻿﻿Insect Screens.   You wouldn’t think these were important until one is set upon by mozzies, can’t-see-ums, etc which can be a daily occurrence in the Caribbean, US Intracoastal Waterway, and Bahamas.  We have screens for most coach house deck hatches.  The Galley Slave is allergic to burning mozzie coils, however we can get away with one lighted in the saloon while keeping screens over our hatches above our bunk in the forward cabin.  This seems to sort out any bugs that make it into our cabin.  With the Hella fans running it is relatively comfortable even in the heat of the tropics. Their biggest issue is having to take them out before we can close the hatches if it rains...so back to the drawing board but, they'll do for now!

Engine Insulation.  I replaced engine and generator insulation as the old insulation was coming away and the old foam was becoming powdery – an easy job to do myself.  I simply cut out the required shape and applied contact cement and/or pins/buttons, which all made for a secure attachment.

Generator Upgrade & Repairs.  We had a coolant reservoir fitted to the generator (same as more modern versions) by a professional mechanic and it’s now much easier to control coolant levels, especially when at sea.

I also replaced my raw water impellor when I noticed there was only a relatively small flow of water being expelled through the exhaust.  Removed impellor plus bits of impellor blades and replaced with spare. I now do this routinely for both the engine and generator at the start of each season – I keep the old impellors that are undamaged, as spares.
Posted by Hunter460 at 10:38 PM 1 comment:

Having made it this far south by late August, we felt the need to relax a little and enjoy the marvellous, clear waters of Bequia.  We anchored off Tony Gibbons Beach, resupplied missing fishing lures at Wallace & Co. (further round the bay) and Lulley’s (right in town), then decided to have our dodger & awning made up whilst we cruised SVG.


Canvas Work.  We wanted a dodger sewn up (having had the stainless bows constructed in St Martin) and, with an extra attachment between the dodger and bimini, the whole cockpit would be effectively protected from sun, spray and rain.  We also had a huge awning made for over the boom – we certainly have made good use of it since, even on the hard at Deltaville!  I would certainly recommend Withfield Laidlow as a friendly and professional canvas man – he’s also the agent for North Sails, sailmakers in Bequia.  He also suggested, given the low profile of our dodger, we should add an extra bow (a third) to our frame to provide more support. 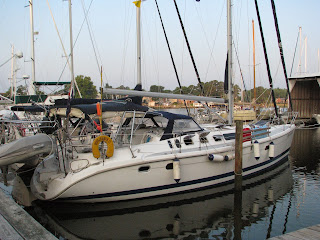 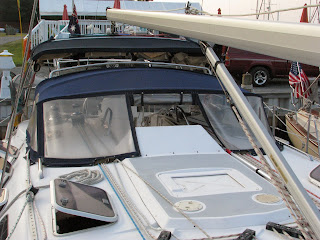 While our order was being made, we took a week to tour the nearby islands of Tobago Cays and Mayreau.  Well, someone's gotta do it!
﻿

Hunter460
Information provided herewith is intended as an account of our personal experiences and in no way should be construed as giving professional advice on purchasing, refitting or maintaining a sailboat. Remember the old maxim: "when in doubt, seek professional advice"....

View my complete profile
The opinions expressed in this blog are personal and the reader is free to agree or disagree as they so choose. I offer it so that anyone contemplating buying and upgrading overseas might find it helpful.