We limped on to Daytona, staying at Halifax Harbor Marina for a week licking our wounds and hoping that repairs could be made - quickly.  Although Jacksonville was later suggested as a better option for Simrad & other electronic gear repairs, we took the opportunity to have the regulator and inverter/charger replaced by Mike, a friendly and helpful local.  Our old one had ceased to work properly ie batteries were not being recharged efficiently when the main engine was running. I cannot say whether this was caused by the lightning strike but it seems, in hindsight, rather coincidental, although they didn’t fail immediately as a result of the strike.

We took the chance to lookover Daytona's famous beaches and fast cars.  We even found a few bargain boat bits shops - a chance to stock up on well, more stock, for the store room.  GS tells me WJ3 is seriously listing to the left.

Aptly named, we thought afterwards!  WJ3 was struck by lightning while on anchor in Titusville, Florida in July 2009.  In a stunning display of sparks, lightning blew the VHF antenna off the masthead, destroying the windex too and cooking the (old) VHF radio.  Most sensitive electronics no longer functioned properly (they appeared to be okay; lights came on but nobody home!) including some auxiliary autopilot harness components (not the computer, nor the front panel, or the rudder indicator, or the gyro compass – they all checked out okay subsequently).  The fixed GPS lighted up but wouldn’t send information; the handheld GPS showed a position on its dial but would no longer interface with computer.  The water and fuel tank monitoring system also stopped working – I expect it is probably the front panel that failed and I plan to start with that first – an upcoming repair for 2011. 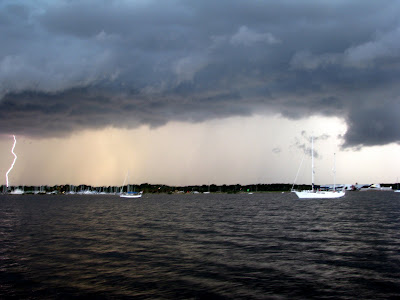 However, the boat’s major metal fittings are grounded and this appears to have saved us from major damage.  I had recently replaced (the day before the strike would you believe) a corroded copper strap joining the base of the mast to a keel bolt (whew).  US-manufactured boats apparently have to be grounded (unlike European-manufactured boats, I’m told) so avoided major structural damages because of this.  Wouldn’t like to repeat the experience however as most technicians simply recommend to replace everything, which of course is very expensive.  It did take quite some time to identify what components worked and what didn’t any more however, so it would probably be a waste of time (and money) to pay for a technician to try and work out where exactly the problem(s) lay rather than just replace stuff, which an owner can fairly easily do.  I plan to replace the sensitive electronic components asap.

We, thankfully were not hurt despite my standing in the cockpit to watch the storm, as it suddenly changed direction and came directly toward us.  We heard a loud bang and then the First Mate, standing more cautiously on the companionway stairs saw sparks shower behind me into the water.  She said the fishing rods on the stern appeared to light up like Christmas trees. We were the only ones in the anchorage/marina who suffered from a strike that evening.  Our lucky day – yes and no!
Posted by Hunter460 at 10:50 PM No comments:


Welcome to the US of A!!  An ever watchful Coast Guard made their presence felt not long after we left West End, Bahamas making our way to West Palm Beach.  We nervously anticipated crossing the Gulf Stream but it behaved beautifully and our crossing was without incident.  Except we were intercepted!  Our papers in order & questions answered correctly, we were able to continue on to our destination.   Not before noticing the level of surveillance.  Powerful boats, regular air patrols and even a little grey rib (with Men in Black) as we neared the coast.

Once anchord in Lake Worth, we were easily able to walk to the Coast Guard Office.  We left Bruce, our faithful dinghy under the watchful eye of staff at the Riviera Beach Municiple Marina.  So, with cruising permit in hand (from the Spanish Virgins) we complete the paperwork to check in.  No fuss, no bother. The experience was nothing at all like rumour mill "advice" we had been given.  Even so, we were glad to have everything in order and to have phoned on arrival (once anchored) for their advice.

Bridges.  Our mast didn’t hit any of the many bridges we encountered while cruising northwards along the Intracoastal Waterway.  Helpfully, at most of the bridges, there was a marker indicating the distance from waterline to the bottom of the bridge.  Our mast is 63’ above the waterline, plus the VHF antenna height – about another three feet – and the bridges were said to be a minimum of 65’ above the water.  I think that turned out to be quite true.  Our antenna never hit but we always (except one time) approached each bridge at minimum speed.  Why?  As you look from the deck, it always seems that the mast is going to hit the bridge or power lines – no matter how high they are.   We became more confident as we progressed though.  With some glee, we watched son, who had joined us for a few weeks, almost fill his pants when we forged full speed under the first bridge that we came to.  I think we entertained quite a few fellow boaters and onlookers as we negotiated those bridges from West Palm Beach to Norfolk for the same reason.


Shallow Draft Keel.  Our keel is shallow draft (5’6’’), wing and bulb affair.  Our method of getting off when grounded is simply to try and reverse or accept a tow from some kind people in passing hot water boats.  We found from experience (plus obvious common sense once we tried it), that pulling over our mast or putting the boom over the side, etc only dug the winged keel in deeper in the soft mud. Not helpful at all!  One time we simply put out the anchor then waited with a coffee while the tide came in.  Twenty minutes later we were away again……


Folding Bicycles.  We purchased two folding bikes from West Marine in – they’ve already paid for themselves.   You can see so much more, visit more interesting places than you would just walking around.  Those American supermarkets that are almost always one or two plus miles away from your anchorage are easily accessible by bike.  We’ve loaded milk crates on the back to carry our groceries home and the First Mate has a (girl’s) basket on handlebars.  We also use our backpacks.  If we were ever stopped at a bicycle weighbridge coming back from a supermarket we’d be way over the limit!


Autohelm Speed/Log.  Originally I had replaced the dial in BVI because it was old and difficult to read.  Later I replaced it with another one in the (from a great boat spares shop in ).  This was one of the many easy fixes "on-the-go" as we rolled up the ICW.  We were spoilt for choice in terms of ships chandlers like West Marine and came across some great second hand stores too.

A Lesson in St Croix

Before we leave the Caribbean, I want to share a valuable lesson or two….


Dinghy - Outboard Engine Cut-off.  I jumped into the dinghy from WJ3 with a disconnected painter in my hand without first checking that the engine cut-off clip was in place.  It wasn’t (still back on board) and so we had to paddle back to the boat. It took 20 minutes of hard work to make up 10 metres in a strong-ish current and wind.  We both learnt a lot about dinghy keys and not to cast off prematurely before the dinghy engine starts, especially in a strong current and/or wind and even worse, in isolated areas.

Sailing in Tropical Waters. Reading the channel markers around the treacherous middle reef in Christiansted Harbor can be quite challenging even in the middle of the day on a good tide.  Sadly, it claimed another victim whilst we anchored nearby. You can never be too careful.

Hunter460
Information provided herewith is intended as an account of our personal experiences and in no way should be construed as giving professional advice on purchasing, refitting or maintaining a sailboat. Remember the old maxim: "when in doubt, seek professional advice"....

View my complete profile
The opinions expressed in this blog are personal and the reader is free to agree or disagree as they so choose. I offer it so that anyone contemplating buying and upgrading overseas might find it helpful.